A Call to Mercy is currently giving holistic support to 350+ orphans and vulnerable children, 50 of whom are being mentored.  The need is immense here…and each child has his or her own story of loss and struggle.  We try to get to know many of their stories.  We don’t want to see them as numbers.   We met Ernestine 5 years ago when she was working as a caretaker at the hospital orphanage.  At night, she was teaching herself to sew with an old machine that the hospital matron had loaned to her.  We could see that she had talent and a desire to do more with her life.  She was the first child we mentored, before it became part of A Call to Mercy’s program.  We paid for her training as a “decorator”.  In Africa, seamstresses decorate weddings, funerals and events with fabric.  Ernestine’s training is over and she has her certificate but is still working with her trainer, without pay, in order to keep learning.  She is also embarking on her own business.  A Call to Mercy purchased satin decorator fabric to help her get that started.

Maris is 14 years old.  He is a cousin to Clovis, the boy in the last post.  Maris has lost all of his elders in his immediate family, both parents, all four grandparents.  He is alone in the world and lives with extended relatives who do not have the means to support him.  Sr Rosemary, Director of Project Hope has taken him under her wing this past year, giving him work in the pig sty during the summer holidays and food when she can.  She begged people she knew in the community for a second hand bike for him because his school is more than an hours walk from where he is currently living.  When we met Maris last week, we were trying to find Clovis’s twin siblings.  Maris helped with that search.  We also learned that his tires were busted and the chain broken on his bike.  We gave him money to get his bike fixed and he returned to show us the work.  Maris is being enrolled in A Call to Mercy’s program so he will not have to worry anymore about who will help him pay his school fees.  He will also receive health care.  He is a sweet and grateful boy.  Here he is with his bike, and wearing a t-shirt donated by Dub Caesar Apparel, Philadelphia. 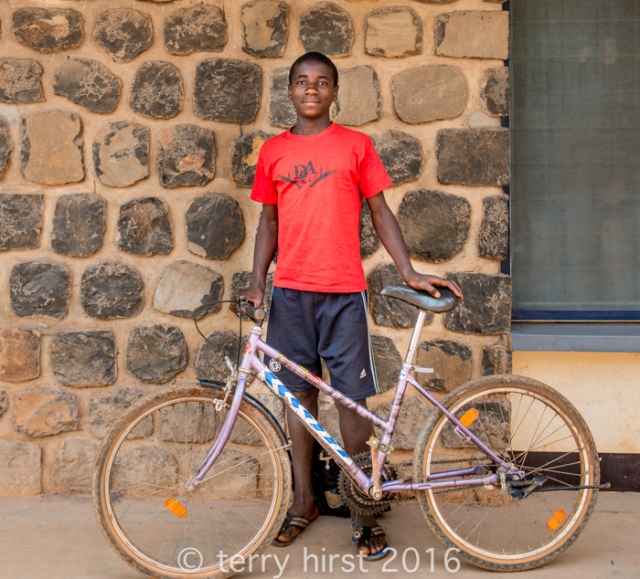 2 comments on “Support from the heart.”